BLACK and MISSING but NOT FORGOTTEN: Darneesha Martin! State Police renewed their call for the public to help find Martin as part of a statewide initiative cracking down on sex crimes called Operation Carpe Diem.

Black and Missing but Not Forgotten

State Police are stilling looking for Darneesha Martin. The Lafayette woman is wanted for trafficking children for sexual purposes.

We first showed you her picture last month when police announced her possible involvement in a sex trafficking case.

State Police renewed their call for the public to help find Martin as part of a statewide initiative cracking down on sex crimes called Operation Carpe Diem.

Merry Christmas to all in shadow, in prison, in isolation, behind bars, in sorror…to all of us!

And those in the shadow, unvisible: The people who challenged my atheism most were drug addicts and prostitutes

I’ve been reminded that life is not as rational as Richard Dawkins sees it. Perhaps atheism is an intellectual luxury for the wealthy 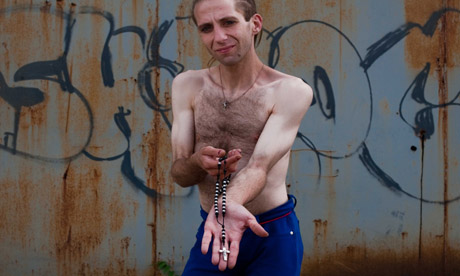 They prayed whenever they could find 15 minutes. “Preacher Man”, as we called him, would read from the Bible with his tiny round glasses. It was the only book he had ever read. A dozen or so others would listen, silently praying while stroking rosaries, sitting on bare mattresses, crammed into a half-painted dorm room.

I was the outsider, a 16-year-old working on a summer custodial crew for a local college, saving money to pay for my escape from my hometown. The other employees, close to three dozen, were working to feed themselves, to feed their kids, to pay child…

What has society descended to? Teenage girl died on Dublin street because she didn’t have the prescription to get an EpiPen from a nearby pharmacy

What has society descended to? Teenage girl died on Dublin street because she didn’t have the prescription to get an EpiPen from a nearby pharmacy

Ana Sayfa PRPick.com Mon, 23 Dec 2013 21:01 CST
A 14-year-old girl died recently after a pharmacy wouldn’t give her mother an EpiPen that would have stopped an allergic reaction to peanuts.
Emma Sloan was out to eat with her family when she ordered what she thought was curry sauce from a Chinese restaurant. The sauce turned out to be satay, which is made with peanuts, and a short time later, Sloan complained of trouble breathing.
She began to have a severe allergic reaction from ingesting the peanuts, so her mother ran around the corner to a pharmacy to ask them for an EpiPen. The EpiPen is a pocket-sized shot of adrenaline that reverses the effects of an allergic reaction, and had they been able to get their hands on one, they could have saved Sloan’s life.
The pharmacist, however, denied Sloan’s mother Caroline an EpiPen because she didn’t have a prescription, but encouraged her to take her daughter to the emergency room. Caroline pleaded with the man to give one to her, but he refused. Meanwhile, Emma Sloan laid out on the street in anaphylactic shock, surrounding by a crowd of onlookers as well as her two sisters. After being refused an EpiPen by the pharmacist, Carolina attempted to take her daughter to the nearest hospital, but she wasn’t able to get that far.
Emma collapsed on the street, and even though a passing doctor tried to keep her alive, she succumbed to the reaction and died in front of her family and a group of onlookers. Caroline says she does not blame the Chinese restaurant for giving them the sauce with peanuts, but is furious that she was ignored by the pharmacist.
“I’m so angry I was not given the EpiPen to inject her. I was told to bring Emma to an A&E department,” said Mrs. Sloan. “Emma was allergic to nuts and was very careful. How could a peanut kill my child? I want to appeal to parents of children with nut allergies to make sure their child always carries an EpiPen with them.”
Emma has always been very careful and would check the ingredients of every chocolate bar and other foods to be sure they didn’t contain nuts,” Caroline added.
Both police and the Pharmaceutical Society of Ireland are currently investigating the young girl’s tragic death.

SONG DEDICATED TO ALL CHILDREN: CHRISTMAS 2013

Signs of the Times | Common Dreams

Signs of the Times | Common Dreams.

Signs of the Times

In the Bay Area, the homeless are suffering more than usual from a cold snap that has killed at least seven people. In New York, the homeless are suffering about as much as they always have, and they are everywhere. Seeking to tell their stories, artist Andres Serrano embarked on “Sign of the Times,” a project to buy 200 signs from homeless people at 20 bucks a shot to offer video testimony of their hard lives. When he asked, they always said yes, sometimes with a hug.

“I see every sign as a story. There are many stories out here that deserve to be heard.”

Children as young as 3 years old can grasp large numbers and may be ready for more direct math instruction when they enter school, U.S. researchers say.

The finding in a study funded by the U.S. Department of Education’s Institute of Education Sciences has implications for U.S. students who are losing ground internationally in mathematics performance, they said.

“Contrary to the view that young children do not understand place value and multi-digit numbers, we found that they actually know quite a lot about it,” study co-author Kelly Mix of Michigan State University said.

“They are more ready than we think when they enter kindergarten,” said Mix, a professor of educational psychology.

Working with colleagues from Indiana University, Mix tested children ages 3 to 7 on their ability to identify and…

Brothers Kicked Out Of School After Becoming Homeless

Brothers Kicked Out Of School After Becoming Homeless

Two students who were kicked out of school after becoming homeless will temporarily be allowed back in their Pennsylvania district until a judge makes a final ruling on their case.

The two brothers -– whose names have not been released to the public -– were expelled from the Eastern Area School District earlier this month because they currently live outside the district in a camping trailer, according to local outlet The Morning Call. The district’s actions directly contradict the McKinney-Vento Homeless Assistance Act, which says that homeless children who live in “motels, hotels, trailer parks, or camping grounds” outside their district are allowed remain in the school they attended prior to becoming displaced.

The special education students, who are in 8th and 12th grade, were displaced after their home was foreclosed on in 2011, local outlet The Express-Times reported. The family was previously told in 2011 that the boys could remain enrolled the district, where their mother works part-time….

Battling Through Childhood: Interview with James Anderson at 2013 Models for Change Conference

NEVER GIVE UP HOPE!

Battling Through Childhood: Interview with James Anderson at 2013 Models for Change Conference.

Battling Through Childhood: Interview with James Anderson at 2013 Models for Change Conference

“My name is James Anderson and I’m 21-years-old, I spent about 5 years going in and out of the juvenile justice system in California. Growing up I had a really, really rough childhood, I grew up in a dysfunctional family and everyday coming home it seemed like it was a new battle …”

JJIE spoke with James Anderson Dec. 16, 2013 at the eighth annual Models for Change National Working Conference in Washington hosted by the John D. and Catherine T. MacArthur Foundation. Anderson is a program assistant at the Anti-Recidivism Coalition.

“The one thing that changed me is one person showed me – this horrible gang member, locked away from…