‘Still With You’: 6-Year-Old Boy Wrote Adorable Letter To His Parents Before He Died Of Brain Infection

A Georgia mother took to Facebook to share a note she found from her late son after he passed away from a rare brain infection.

Amber Shoemake, of Pike County, said she was always over protective of her 6-year-old son, Leland, who was diagnosed with a rare form of meningitis, according to the family’s GoFundMe page.

Leland became ill in August and was admitted into Children’s Healthcare of Atlanta at Egleston, where he was in critical condition for two weeks, WSBTV reported. He passed away shortly after. 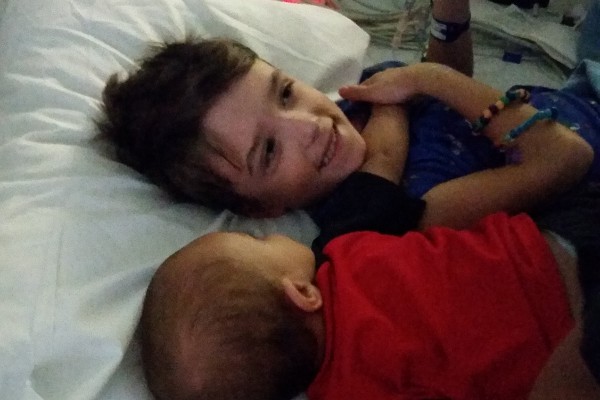 When Amber went home to pick out her son’s burial clothes, she found a note on the living room table from Leland thanking her and his father for their support.

Amber shared the note on Facebook page “Prayers for Leland” along with a heartfelt paragraph about Leland.

“This is Amber. This will be my only post on here for awhile. I was over protective of Leland and tried my best to keep him safe. The one thing he loved most was playing in the dirt. I never imagined that would be the thing that would take him from me. He was my world. He made me a mother. We struggled so hard to have him. He was a preemie baby but came out screaming and healthy.

He was smart from day one. He knew his abc’s, numbers, colors, shapes and 20 sight words by the time he was a year old. He was our little nerd and we loved that about him. He loved school and loved to learn. He loved the history channel, the weather channel, documentaries and anything about history. He loved ships like the titanic and learning about things like WWII. He was perfect. His favorite movie was jaws. His favorite director was Steven Spielberg. And his favorite actor was Adam Sandler. He loved his brother and his family so much. He was the life of every party. His smile could light up a city. He was the smartest, most caring, loving little boy there ever was.

He was taken from us too soon. He could have done great things in this world. We would only have a few friends in this county if it wasn’t for Leland. He never met a stranger and he loved everyone. My whole life this has been my only fear and it came true. No one should ever have to bury a child. I always said I hope it’s me that goes first bc [because] I don’t think I’m strong enough to handle something like this. It still doesn’t seem real to me. I find myself sitting here remembering things he would say and quotes from movies he would repeat. Like ‘check ya later’ from dazed and confused. Or ‘you’re gonna need a bigger boat’ from jaws. Or all the million things he used to say from Billy Madison.

He was the light of our life and the center of this family. I count the days until I can see his sweet face again and hear that beautiful voice. When Tim and I came home for the first time to get him clothes to be buried in, this is the note we found from him on the table in the living room. We have no idea when he wrote it but you can tell he was always a special child. We will love you forever Leland. Sleep tight and don’t let the bed bugs bite!”

The family started a GoFundMe page to help pay for Leland’s medical bills. The page has already raised more than $9,000 as of this writing.

September 30, 2015 | Categories: Uncategorized | Tags: 6-year-old son, Amber Shoemake, Leland, Leland became ill in August and was admitted into Children’s Healthcare of Atlanta at Egleston, of Pike County, The note read: “Still with you. Thank you mom + dad. Love.”, who was diagnosed with a rare form of meningitis | 1 Comment

On September 4, 2015, approximately 2,000 refugees set out on foot from Budapest to Austria. For days prior, they had been stuck in the Hungarian capital, many of them stranded in train stations with little information. Late that night, after walking about 30 kilometers, they were finally picked up by buses, which drove them to the Austrian border. The chaos of the process, documented in the short film above, was revealing.

The European refugee influx hit Hungary hard this summer, with the country’s inadequate facilities—and the government’s inadequate response—creating a crisis that could have been avoided.

While many Hungarian citizens did their best to help the migrants with food, water, and medical aid, the official reaction around railway stations was limited to some extra mobile toilets and temporary water taps. Indeed, the Hungarian government has spent more money on a new border…

By Amanda Williams for MailOnline

September 30, 2015 | Categories: Uncategorized | Tags: Burgundy, French school makes Jewish and Muslim pupils wear red and yellow discs around their necks at meal times in chilling echoes of Nazi segregation, Furious parents say it brings back chilling echoes of the yellow stars Jews were forced to wear under the Nazi occupation, ordered non pork-eaters to wear red discs and those who did not eat meat to wear yellow disks, Piedalloues primary school in Auxerre | 1 Comment

“•Parents, you may want to think about who has their hands in your kids’ pockets”


A new (and creepy) PSA by France’s non-profit association Innocence En Danger (Innocence In Danger), features both a male and female being groped by a hand disguised as a cellphone, according to Ads of the World.

Both ads also include the tagline, “Sexual predators can hide in your child’s smartphone.”

In general, the organization works in 29 countries to bring awareness of protecting children from sexual abuse. In this campaign, the focus is on sexual predators that “hide” in your child’s mobile devices. The ad was designed by advertising agency Herezie in Paris, France.

In Canada, charitable organization Little Warriors has a similar mission to raise awareness and end sexual violence. In their 2011 annual report, the organization found one in three girls and one in six boys will experience an unwanted sexual act before their 18th birthday. On top of this, 95 per cent of victims know their perpetrators.

What do you think? Are these campaigns offensive or appropriate? Let us know in the comments below:

September 29, 2015 | Categories: Uncategorized | Tags: "Sexual predators can hide in your child’s smartphone.", a hand disguised as a cellphone, advertising agency Herezie in Paris, focus is on sexual predators that "hide" in your child's mobile devices, France., PSA by France's non-profit association Innocence En Danger (Innocence In Danger), the organization works in 29 countries to bring awareness of protecting children from sexual abuse | 1 Comment

A new series of sex education books has been launched. Photo: Jessica Gow/TT

Puberty can be difficult enough for the average Swedish teenager. But how do you explain this challenging transition from childhood to adulthood to a child with special needs?

“Ten years ago I talked to a mother whose daughter was autistic and was wondering how to discuss menstruation with her when the time came,” Margareta Nymansson, one of the authors behind a new series of textbooks for special needs education dealing with sex, love and puberty, told The Local on Monday, explaining how the project began.

“I wrote a book explaining that all girls bleed and what happens when you do and when she got her first period she was not worried because she was prepared for it, in fact she felt proud,” she said.

A decade later, she and her colleagues Vija Bjelvenfeldt and Hillevi Tärmö have now, with the help of the education department at Uppsala Council, put together a book series designed to help pupils with special needs navigate thorny areas such as puberty, love and sex.

“It is a sensitive topic and therefore a topic where special needs education is very behind. We always felt it was something that had to be taught in class but we never had the right material. These books are supposed to form part of that future material,” said Nymansson.

She explains that children with special needs often struggle with nuances, so the idea is to explain these concept in a straightforward way.

For example, ‘sex’ in Swedish, which means both sexual intercourse and the number six, can be confusing. Instead the books use the slang word ‘knulla’ (best translated as ‘to fuck’), which may be perceived as vulgar, but has the benefit of being unambiguous.

“We don’t necessarily feel comfortable using it ourselves, but it is a word that many understand,” said Nymansson.

Yet another book, which is still in the making, discusses the right to refuse physical contact.

“It is about the right to say no, that nobody is allowed to do anything to you that you don’t want them to do. It’s not unusual that girls with disabilities get abused,” said Nymansson.

Sex education has been a compulsory subject in Swedish schools since 1955. But taboos are still being broken in the Nordic country, famous for its liberal stance on gender norms and sexual relations.

Parents are taking charge to keep kids safe at what has now become a deadly intersection.

The Ultimate Super-Power is not Dodging a Bullet, Flying or Possessing Enormous Strength. It is Putting a Smile on Sick Children’s Faces in Hospital.

The ultimate super-power is not dodging a bullet, flying or possessing enormous  strength. It is putting a smile on sick children’s faces in hospital. Workers from Memphis Cleaning dressed up as Superheros. Image Source: [Barcroft/PIttsburgh Tribune]

‘Monster Walking Around Here’ After Teen Killed, Another Wounded In Kenwood « CBS Chicago

Police said two teenagers were outside around 7:30 p.m. Saturday, when a car drove by, and someone inside started shooting. Tyjuan Poindexter, 14, was shot in the head, and died at the scene. A 15-year-old boy was shot twice in the leg, and was being treated at the University of Chicago Comer Children’s Hospital.